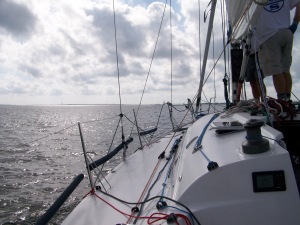 I went sailing in Charleston’s Race Week a couple of years ago with a friend who owned an A40RC Archambault racing boat. We did a couple of days of ocean races with a crew of 5 or 6 – 26 miles per day and it was perfect weather and a lot of fun. Sailing is one of my great loves. My dad bought a Scorpion when I was young and we sailed many hours on the lakes and bays of North Carolina. Later on we moved up to a 17 ft. Hobie Cat and spent some “quality time” in the wind and waves at Myrtle Beach, Holden Beach and on Bogue Sound at Emerald Isle.  We lost that boat off of Holden Beach, at Lockwood Folly,  one summer and Dad bought a Hobie One on the way home. Each one of those boats has some stories behind them that helped shape me in some way. (I will write about those events here, I’m sure, at some point.)

I’m also an avid reader of books on sailing and the sea and the storms that challenge and change men’s souls. All of this has given me a personal perspective on the Bible stories like, “Lord, don’t you care?” on the sea of Galilee, when the disciples feared for their lives as Jesus slept in the boat. Or when Paul was shipwrecked, in Acts 27; or even the moment when Peter stepped out of the boat and on to the water. In my reading, recently, I came across a paragraph that really struck something inside me. It is a quote from the book “The Water in Between – A Journey at Sea”, by Kevin Patterson. The book was published in June of 2001 and the quote is about life rafts.

I thought it was a real interesting snap shot of life itself and the choices we make.

“Life rafts have killed hundreds of sailors by offering a false solution to problems on the boat. In a storm in 1979 a fleet of sailboats in the Fastnet Race were hammered off the coast of England by Force 11 and 12 winds and twenty-eight foot seas. Of the 24 boats that were abandoned during the worst of the storm, 19 were subsequently recovered afloat. Seven of the sailors from these abandoned boats died in the sea. If they had remained on their boats, and worked to preserve them, they would have preserved themselves. It is not surprising that sailors in battered boats start looking toward the life rafts. But it is often a fatal temptation.” (In fact, for the past 30+ years the Safety At Sea seminars have taught sailors that you NEVER STEP INTO A LIFE RAFT, YOU ONLY STEP UP TO ONE. If your boat is not lower down in the water than the life raft is–you stay on the boat, because boats have a greater ability to survive, than life rafts.)

There is just so much in that paragraph to think about, in terms of the choices we make in life, relationships, family,  and business. It’s rich and thought provoking for me. So many times in the storms of life I’ve looked for my own answer and jumped into the closest life raft – sometimes to find myself safe and other times in worse shape for the choice. It makes me wonder how often I’ve missed what God was really trying to work in me by looking for “my way out” – a perceived easier way out. I’m working on not panicking and responding with patience, peace and wisdom. Not there yet, but we all need to remember- the alternative can be fatal.

4 thoughts on “The Problem with Life Rafts”